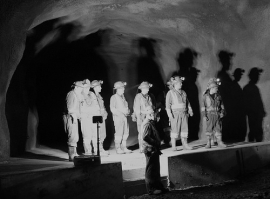 Canadian miner Stornoway Diamonds reported a net loss of US$27.5 million (C$35.9 million) during the second quarter despite higher revenues, as the transition to underground mining at the Renard mine impacted the company's carat recoveries and sales during the first half of the year. The move underground has taken longer than anticipated, as equipment availability and management problems have slowed their progress. The recorded loss compares unfavorably to the $3.1 million in profit the company achieved in the second quarter last year.

“Our second quarter results reflect the continuing transition to underground mining at Renard and the accompanying lower carat recoveries and sales during the first half of the year," said Matt Manson, President and CEO of Stornoway. "Ramp-up of the underground mine has been slower than expected ... [but the entire mine and operation] has been achieved with the capital structure established in our original 2014 construction funding. Sales revenue during this period has been less than initially forecast, resulting in lower financial liquidity and cash flow than expected." Stornoway expects higher-quality carat recoveries in the second half of the year, Manson said, as the company moves into the central mining areas, which contain higher-grade ore. The company is seeking additional funding.