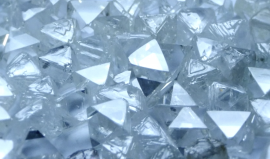 Russian mining giant ALROSA saw its July rough diamond sales increase by 17% year-over-year to $333.8 million from $286.1 million as demand for expensive high-quality diamonds remained strong. Total sales for the month increased by 16% to $339 million, including $5.3 million in polished diamond sales, a 28% decline from the same month in 2017, excluding the sale of the Dynasty Collection and the 51.38-carat round stone, the central diamond in the eponymous collection.

“Compared to last year," says ALROSA Deputy CEO Yury Okoemov, "demand for rough diamonds remains more balanced – almost all diamond categories benefit from continued demand in key markets globally. In July, there was a minor seasonal softening on the market in the run up to August holidays, but not as intensive as last year. Demand for expensive high-quality diamonds kept being strong during seven months.”