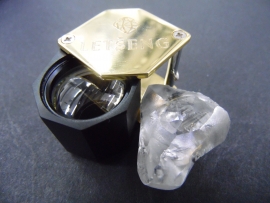 Gem Diamonds Limited (LSE: GEMD) recoverd a 100.5 carat, top white color Type IIa diamond from the Letšeng mine in Lesotho, the eleventh diamond of over 100 carats in 2018. Just past the halfway mark of the year, Gem Diamonds has already surpassed its large diamond recovery from 2017 (8), more than doubles that of 2016 (5) and is the first time they have recovered 11 such stones since 2015. It is the first in +100 recovery in H2 of 2018, following a remarkable string of recoveries in the first half of the year. The miner dug up its 10th massive gem in early June: a 102-carat diamond.

London-listed Gem told us earlier this year it had changed its blasting and crushing process to recover more of the high-grade, 100-carat-plus diamonds at Letšeng, resulting in a string of discoveries this year. Earlier this year, boss Clifford Elphick remarked that “demand had never been stronger” for its high-end diamonds, which it sells via tender in Antwerp.