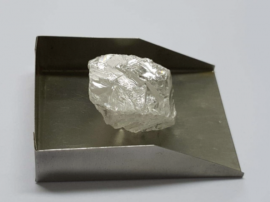 Lucapa Diamond Company completed the first sale of alluvial diamonds for H2 2018 from the Lulo Diamond Project in Angola: the parcel of 2,527 carats achieved gross sale proceeds of US$2.0 million (A$2.7 million), representing an average price per carat of US$800 (A$1,079), as several large stones were excluded from the sale. Specifically, the July sale excluded four large white 'specials' (+10.8 carats) and a pink colored special that will be sold later this year: the pink stone is the largest colored diamond ever recovered from Lulo (46 carats) and the whites include three +70 carat diamonds, along with a 114-carat diamond recovered earlier this month, the 11th +100 carat diamond recovered from Lulo to date. Subsequent to the ASX announcement of 11 July 2018, deep boiling of the 114 carat stone has confirmed it is a Type IIa top-color white diamond (pictured).

During the second quarter of H1, ended June 30, the company's Lulo Diamond Project in Angola produced 5,058 carats of diamonds, an increase of 20% compared with Q2 2017; for the first half of the year, diamond production has risen by 15% to 9,566 carats, despite the number of individual stone recoveries falling by 14%. The overall increase is thus attributable to the 33% increase in size of diamonds recovered, with the number of specials increasing 24% to 118 in H1 2018, compared with 95 in H1 2017. The weight of the specials recovered has risen up 18% to 1,412 carats. Lulo mining company, Sociedade Mineira Do Lulo (SML) achieved gross sales revenues of US$5 million during Q2 (up 6%) and US$15.9 million for H1 2018 (up 3%). These sales represented an average price per carat of US$1,479 for the Q2 and US$1,642 for H1 2018, notwithstanding the decision to withhold the large specials from the June 2018 sale.

The company also notes it is looking forward to diamond sector reforms in Angola, including an imminent launch of a new diamond marketing policy: "During the Quarter, the new Angolan Government, headed by His Excellency President Joao Lourenço, continued to advance diamond sector reforms in line with the Government’s goal to expand Angola’s diamond production through increased foreign investment," the company stated. "This included President Lourenço stating a desire for Angolan diamonds to be marketed in jurisdictions such as Antwerp during a visit to the global diamond trading centre, and an anticipated Presidential decree to launch a new diamond marketing policy for Angolan production. Lucapa remained in positive dialogue with Angolan officials during the Quarter to assist the Government in achieving their stated objectives and looks forward to favourable outcomes."

Meanwhile, at the Mothae Diamond Project in Lesotho, Lucapa notes that construction of new 150 ton per hour diamond plant continues on schedule for H2 2018 commissioning, with most major components, including two XRT large-diamond recovery units, now delivered to site. They also recovered large yellow diamonds weighing 89 carats and 25 carats from the current bulk sampling program designed to increase the known Mothae JORC resource. Diamonds recovered from the bulk sampling program will be included in the first Mothae sale parcel currently scheduled for Q4 2018. Their bulk sampling program is ongoing and is expected to be completed late in the September 2018 quarter, when results will be announced. Overall recoveries of Mothae diamonds from the ongoing bulk sampling program totalled almost 1,000 carats at 30 June and currently stand at ~2,000 carats. Finally, also during the Q2, Lucapa launched an extensive exploration program at its Brooking project located in the West Kimberley region of Western Australia