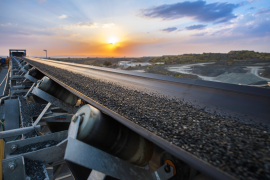 Petra Diamonds posted a 21% rise in revenue to $576.4 million for the twelve months to June 30 from $477 million a year earlier, citing higher diamond prices (+2% on like-for-like basis) and production (+15%); but the miner worried investors by saying it expects to produce 4.6 million to 4.8 million carats in 2019, well below the 5.0-5.3 million carats it forecast in July last year. Excluding its interest in the Kimberley Ekapa mining JV, which it recently sold for $22 million, Petra says it will produce 3.8 million to 4 million carats in 2019. On the news, Petra shares fell to their lowest in more than 2-1/2 years in early trade before recovering a bit to trade down 4.2%.

Overall production for the year was up 15% to 4.6 million carats (FY 2017: 4.0 Mcts), in line with guidance of 4.6 to 4.7 Mcts, helped by the ongoing ramp-up of its new Cullinan plant in South Africa. The miner, which operates four mines in South Africa and one in Tanzania, as well reported that revenue climbed by 21% to US$576.4 million (FY 2017: US$477.0 million), with rough diamond prices on a like for like basis up ca. 2% for the Year, compared to FY 2017: they sold 4.6 million carats at an average price of $127 per carat, adding that it expects the diamond market to remain healthy. Still, business has been weighed down by the recent strengthening of the South African rand as well as the confiscation of a consignment of diamonds by the Tanzanian government last year. Petra said on Monday there was no update regarding its confiscated diamonds in Tanzania.

The message from Petra was therefore rather mixed, with promising gains being countered by continuing issues future production and significant debt - although the miner reduced its debt from $513.9 million to $436.1 million this year, as it raised $170m from a sale of shares in May in order to pay down its debt. Johan Dippenaar, Chief Executive of Petra Diamonds, commented: "FY 2018 represents a solid progression for the Group after the challenges of FY 2017 and H1 FY 2018, and places our production on a firm footing, backed up by a strong safety performance." He added, "The future focus of the Group will be on the continued optimisation of production volumes and cost structures across our portfolio in order to maximise cash generation."

Yet as Moneyweb points out, while production at Petra's Cullinan mine did indeed rise by 74% in the full year, but FinnCap analyst Martin Potts expressed concern on the quality and price of diamonds from the mine. “Overall price per carat was a long way below expectation as the mine has been recovering less of the higher value stones,” Potts said. “It suggests that Cullinan may have a problem and therefore may be less valuable as an asset than had previously been thought.”