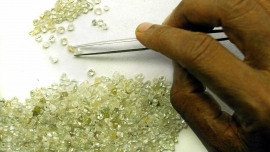 Zimbabwe's state-owned diamond mining company, the Zimbabwe Consolidated Diamond Company (ZCDC), reported a massive 44 percent increase in rough diamond production during the first half of 2018, according to The Sunday Mail, with investment in modern mining and processing equipment and the resumption of conglomerate mining* identified as the main drivers. The ZCDC unearthed 1.56 million carats in the first six months of 2018, eclipsing in half a year the 1.1 million carats recovered in all of 2017, as they plow forward toward their stated goal of 3 million carats for the year - a target which, if achieved, would represent an 84 percent jump from the prior year. The increase in production is in line with the government’s call to increase production in all mining operations around the country, as the push to achieve President Mnangagwa’s call for an upper middle income country by 2030 gathers pace, the newspaper writes.

ZCDC CEO Dr. Moris Mpofu said, “ZCDC has produced 1,561,121 carats from January to June 2018, an increase of 44 percent and 83 percent for the same period in 2017 and 2016 respectively. ZCDC is now on track to achieve its targeted full year production of 3 million carats by the end of 2018." He continued, explaining, "Due to the depletion of known rich alluvial deposits, ZCDC carried out an intense exploration of the conglomerate and the positive results led to investment in hard rock mining of the conglomerate ore and a new processing plant. ZCDC’s conglomerate processing plant, with the capacity to process 450 tons per hour and purchased at a total cost of $25 million, is the first of its kind in Zimbabwe, equipped with fifth generation X-ray recovery technology and a Mega Diamond Recovery (MDR) section for the recovery of large diamonds which were previously left out in past mining operations.

The state miner has also taken delivery of mobile conglomerate crushing units as well as earth moving machines to match the conglomerate plant feed requirements, bringing the total project investment to US$100 million. ln the medium term, the miner intends to invest a further $400 million in its operations as it targets to get to 11 million carats by 2025. Of the $400 million, $200 million will be financed through foreign direct investment while the other $200 million will come from the firm’s diamond sale returns. "This trend (growth) sets ZCDC on a positive trajectory to achieve its 2025 target of 11 million carats, which equates to a 488% increase from 2017,” said Dr Mpofu. “ZCDC is well poised for growth and will become the fifth largest producer of rough diamonds in the world by 2025. ZCDC will invest approximately $400 million into its operations by 2025 to build capacity in exploration, mining, processing and diamond value management and enable sustained production,” he said.