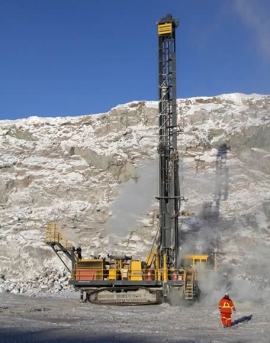 Canada’s Mountain Province Diamonds second quarter output at the Gahcho Kué mine jumped by 20 percent to 1.9 million carats compared with 1.6 million carats a year earlier as plant optimization led to better-than-anticipated performance, and recovered grade continues to outperform expectations. The plant treated 899,000 tons during the quarter, 17% ahead of the same quarter last year despite a decline in ore tons mined, and achieved a higher average grade.

Mountain Province Diamonds - a 49% participant with De Beers Canada in the Gahcho Kué diamond mine - said 1,930,500 carats were recovered at an average grade of approximately 2.15 carats per ton in Q2 2018, which was 2% higher than the same quarter last year, reflecting a strong grade performance. For the year to date, 3,571,500 carats have been recovered at an average grade of 2.12 carats per ton. Mountain Province mined signficantly fewer tons in Q2 2018 compared to the same period last year: 341,000 tons (940,000 in 2017). This was primarily due to a high waste cycle in the quarter as a result of the start up of the Hearne Pit. For the year to date, a total of 1,082,000 tons of ore have been mined.

Stuart Brown, the Company’s President and Chief Executive Officer, commented: “The second quarter performance continues to follow the trend of ongoing excellent performance set by the Gahcho Kué Mine team, in a safe and sustainable manner. We expect this trend to continue as we enter the second half of the year. The continued good performance is pleasing as the mine matures into its steady state production methodology of continuous improvement.” The miner says it remains well positioned to achieve the upper end of its full year 2018 production guidance of 6.3 – 6.6 million carats recovered.