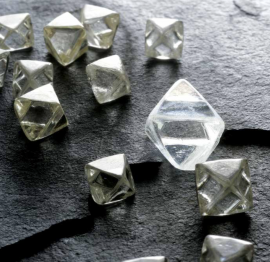 Russian diamond mining giant ALROSA ramped up the volume of processed ore from their alluvial diamond operations, resulting in a 15% increase in overall production compared to the prior quarter while remaining 18% off the pace of production volume during the same quarter a year ago. The miner produced 8.5 m carats during the last three months compared to 7.4 million carats in Q1. The miner attributes this increase, "to seasonal return to production at alluvial deposits supported by the recently ramped-up assets, the Udachny underground mine and Severalmaz." ALROSA’s diamond production for Q2 2018 totalled 10.4 million carats. The y-o-y decline in diamond production was due to the closure of the Mir underground mine (UM), a lower diamond grade at deep horizons of the International UM as well as the processing of a proportionally lower grade of ore at the Jubilee pipe and the Aikhal UM of the Aikhal Division.

Market overview: demand for jewelry and rough diamonds both growing

ALROSA summarized recent market conditions, noting that in the first three months of 2018, the diamond jewelry market grew by 7%, "as all key markets enjoyed rising sales on the back of a stronger consumer sentiment and a better macro environment."  They estimate that diamond jewelry sales in the North American market (USA and Canada) increased by 5% compared to the same period last year, while sales in the Asia-Pacific region grew 11% y-o-y, "largely driven by higher sales in the Mainland China and stronger demand in Hong Kong and S.Korea supported by a growth in tourists’ flow. " In dollar terms, sales in Europe added 14%, mainly on the back of a stronger euro.

They add that In Q2 2018, the rough diamond market demonstrated increased demand across the entire product mix, driven by a reduction in rough diamond supply from diamond miners, “normalized” stock levels at the consumers’ (mid-stream) and ongoing diamond jewelry demand growth in key markets, particularly in the US, Europe and China. As a result of the above factors, no traditional seasonal slack was observed in Q2 2018.