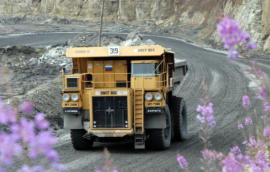 ALROSA has announced that mining operations on the new diamond deposit Zarya are entering their final stage, having removing 10 million cubic meters of overburden over the last two years, and the company expects diamond mining will start in 2019. The deposit is estimated to contain total diamond resources of 3.5 million carats worth more than USD 1 billion. Its development will allow the miner to replace the declining reserves of Komsomolskaya pipe, where mining operations are nearing their completion.