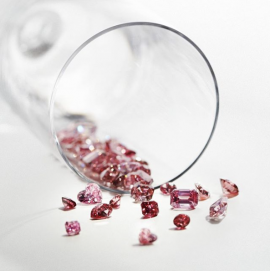 At the Diavik Mine in Canada's NWT, in which Rio Tinto holds a 60% stake, the 1.15 million carats recovered in the first quarter of 2018, an 3% increase over the corresponding period in 2017 and an 8% increase over the first quarter of 2018. The miner attributes the improvement relative to Q2 2017 to higher plant throughput. They add that development of the A21 project is ahead of schedule, with the first ore uncovered in March. The mine is expected to be at full production capacity during the fourth quarter of 2018.

Overall production for the first half of 2018, at 9.2 million carats, has increased by 9% compared to the same period a year ago (8.5 million carats), with Q1 and Q2 production virtually identical at around 4.62 million carats. Diamond production guidance for 2018 remains the same as previously announced, between 17 and 20 million carats. The miner's Cycle 6 sale (out of 10 annually) is currently underway, July 16-20. The Argyle Pink 2018 tender comprises, "An enthralling collection of 63 stones."