BlueRock Diamonds Increases Production in 2017 at Kareevlei Mine in S. Africa 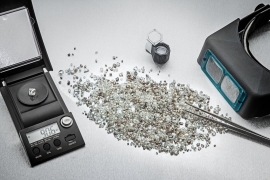 BlueRock Diamonds, a junior miner listed on AIM in London and operating the Kareevlei Diamond mine near Kimberley in South Africa, announced its production increased significantly in 2017, yielding high-quality diamonds with an average value per carat of $362. The miner said that it met its two primary targets in 2017 – operational profitability and monthly processing volume of 25,000 tons, which unearthed 2,438 carats in the first half of the year, compared with 543 carats, a year earlier.

Production surged 171% to 153,000 tons last year from the KV2 (Kareevlei-2) kimberlite pipe, which has an inferred grade of 4.5 carats per hundred tons (cpht). "Our investment case is very simple", said non-executive chairman Paul Beck. "We have an exciting, strategically located asset, producing exceptional quality diamonds; we have a defined development plan, focused on increasing both production and the average grade of diamonds extracted; we are operating in a market with robust fundamentals; and we have a strong management team to drive the business forward." KV1, the second pipe the group started mining in April, is located 40m from KV2 and has an inferred grade of 6.3 cpht., 40% higher than the inferred grade of KV2 (4.5cpht).  It is expected to provide a material contribution in fiscal year 2018. "This is an exciting step for us as we look forward to a potentially significant increase in grade," Beck said.

Last year was the first for BlueRock under its new management headed by chief executive Adam Waugh. The new management team will now concentrate on making Kareevlei as profitable as possible. It is well-funded to develop the project, having untaken two separate equity fundraisings last year of £366,000 ($486,000) in June £860,000 ($1,140,000) in August. Waugh, who become chief executive in 2016, said the company is “well placed” to exploit numerous deposits that have been identified by larger operators but deemed to be “too small for them”. “Whilst too small for the larger companies, they represent a good opportunity for a smaller operator like BlueRock which has access to capital and expertise,” he said. Diamond mining in South Africa is generally conducted either by large companies primarily interested in the largest deposits, or family style operations that focus on alluvial deposits, Waugh explained. “BlueRock is one of the few exceptions to this rule,” he said.