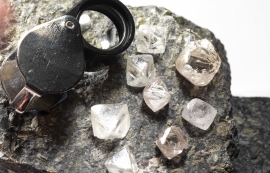 The slowdown in output is a result of the lower grade of diamond recoveries, falling from 51 cpht in Q1 to 40 cpht in Q2, while the amount of ore processed remained the same at 562,000 tons. The miner said the grade and carat recoveries during the quarter reflect the processing of lower grade production ore and ore stockpiles as the Renard Mine transitions from open pit to underground mining. Mining in the Renard 3 open pit concluded in April, while the ramp up of the underground mine production progressed steadily during the quarter.

President and CEO of Stornoway Matt Manson added, By the end of the quarter this transition [from open pit to underground] was essentially complete, albeit with a slower than expected underground ramp-up because of lengthening lead times on mobile mining equipment. We have been particularly encouraged by the performance of the new ore sorting plant. Initial diamond results are encouraging, and given the volume and quality of the waste that is being rejected we see the potential for processing capacity in our plant beyond its current name-plate rating. Exploiting this potential new capacity will involve the development of a modified mine plan to support the accelerated mining required, and permitting.”