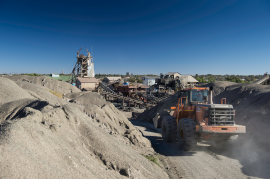 Petra Diamonds late last week announced that it had sold its stake in the Kimberley Ekapa Mining joint venture (KEM JV) to its namesake partner, Ekapa Mining, for about 300 million rand ($22 million). The miner explained that the move was undertaken, "to ensure a sustainable future for KEM JV by placing the operation under the sole stewardship of an operator best suited to maximise its value." Petra further claimed, "Ekapa Mining's extensive experience of operating specifically within Kimberley and its ability to solely focus on these assets is expected to provide the right fit for the operation, thereby ensuring continuation of diamond mining employment and related economic activity in this renowned diamond centre."

KEM JV is a joint venture between Petra and its partner Ekapa Mining and incorporates the Kimberley Underground mine, extensive tailings retreatment programs and the high volume Central Treatment Plant - all located in or around the historic diamond mining centre of Kimberley in South Africa. The sale of its 75.9% stake in the operation will allow Petra to pay particular attention to its Finsch and Cullinan diamond mines, sources of major recent findings. The transaction would also help the miner reduce operational risk and shore up its finances, the miner added. Petra has accumulated a significant debt in the last 18 months as it borrowed heavily to expand its mines, particularly the Cullinan mine.

Petra has also faced its share of difficulties in Tanzania, where the government last summer seized a parcel of 71,654.45 carats valued at about $15 millionSells  over allegations that the value of the diamonds had been underdeclared. The government’s evaluation claimed to have found a $15-million discrepancy. At the time, Petra said it was the responsibility of the government’s diamonds and gemstones valuation agency to provisionally valuate the diamond parcels from the mine before they are exported to Antwerp for sale. Two government ministers have since resigned after they were allegedly implicated in the government’s investigation into the diamond industry, while the head of the State-run diamond and gemstone valuation unit and a government gemstone valuer have been charged with economic sabotage for their role in allegedly undervaluing the parcel of diamonds. The Tanzanian government did grant Petra authorisation to resume the export and sales of diamonds from its Williamson mine last year, but the fate of the seized parcel remains unclear.