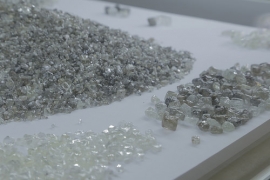 Global rough diamond production in 2017 grew to levels not seen since 2008, and achieved its highest overall value since the Kimberley Process started gathering statistics in 2004 - and most likely the highest value ever for a single year of production. The volume of diamond output in 2017 surged by 19% to 150.9 million carats (126.4m cts in 2016), with the average price increasing 8% to $105 per carat. According to KP data, the total value of diamond production rose 29% $15.87 billion, topping the $15 billion mark for the first time in a single year, while import and export values remained nearly unchanged.

While Russia continued to be the largest rough diamond producer in 2017, increasing its output by 6% to 42.6 million carats, good for a 15% rise in value to $4.11 billion, the main driver of the increase in global production was Canada, where production volume rose 78% to 23.2 million carats, overtaking Botswana as the second-largest producer country by volume. By value, Canada production grew by 47% to $2.06 billion, making it the fourth largest producer in terms of value. The rise in Canada’s output is attributable to the production from two new mines - Gahcho Kué and Renard - which both entered full production in late 2016. Botswana continued to be a huge force in global diamond production, as the value of its diamond recoveries grew by 17% to $3.33 billion, the second-highest worldwide, and its volume climbed 12% to 23 million carats. Meanwhile, South Africa saw its production value increase by a whopping 147% to $3.09 billion, the third highest total in 2017, as the average price rose by 113% to $319 per carat.

Global rough imports increased 3% to $49.85 billion for the year, with total volume up 28% to 489.9 million carats. The average price of imports dropped 20% to $102 per carat. The leading importer of rough diamonds continued to be India, as its imports increased by 31% to $18.98 billion, backed by a volume increase of 40% to 195 million carats. India in 2017 was responsible for 40% of all rough diamond imports by volume and 38% by value. The European Union (EU) - mainly Belgium - was again the second leading importer of rough diamonds, increasing its imports by 41% in volume to 160 million carats, although the value of imports declined by a billion dollars. The EU represented 32% of all rough imports by volume and 25% by value. The United Arab Emirates (UAE) following in third place, importing 87 million carats, good for 18% of all imports in terms of volume and 14% in terms of value.

Exports of rough diamonds went up 3% to $49.94 billion, and by volume rose 18% to 453.6 million carats. The overall average price of rough exports fell 13% to $110 per carat. Exports from the EU fell 3% to $12.68 billion but increased by 27% in volume at 129.2 million carats, making it the largest export center for rough diamonds. Some 28% of all rough exports by volume and 25% by value originated in the EU, followed by the UAE, Botswana and Russia. The EU also issued nearly 32,000 of the 70,000 KP certificates issued worldwide. Excluding an outlier in the form of Cameroon, which curiously had an average price per carat of $522 for only 1,757 carats, this year Namibia displaced Lesotho for the country with the highest average price per carat achieved, at $519. Sierra Leone achieved $423 per carat from 289,141 carats, while South Africa's leap to $319 per carat put it ahead of Lesotho, which fell to an average of $304 per carat while nearly quadrupling it production to 1.13 million carats with the arrival of the Liqhobong mine.