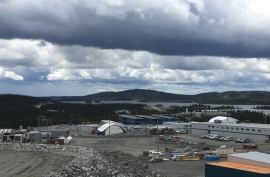 Rain clouds have chased away the forest fire hazard at Stornoway Diamonds' Renard Mine in Quebec, and the miner expects to commence remobilization of staff to the mine this morning, July 4. "Over the last 48 hours, rainfall and a shifting of the prevailing winds have allowed the principal fires south of the Clarence and Abel Swallow Airport to be contained, allowing for the safe transit of mine staff to the Renard Mine. Stornoway expects to recommence full mine operations forthwith." Hopefully this will be the last appearance of the 'dog days of summer' for the Canadian miner.*

*To the Greeks and Romans, the “dog days” occurred around the day when the 'dog star' Sirius appeared to rise just before the sun, in late July. They referred to these days as the hottest time of the year, a period that could bring fever, catastrophe or disaster.