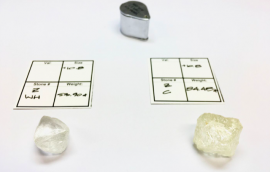 Canadian miner Mountain Province Diamonds (49% participant with De Beers Canada in the Gahcho Kué diamond mine in Canada’s NWT) announced the results of its recently completed fifth diamond tender sale of 2018, and the total proceeds from the sale - US$30.3 million (CDN$40.0 million) - set a new high for Mountain Province’s tender results to date. The tender also included the sale of the miner's highest value individual diamond, as well as the highest attributable value per ton ($234) to date, with a normalised value at US$86. This adds up to a nice welcome for Stuart Brown, who enjoyed his first day as the company’s new President and CEO on July 1.

“The positive results of our fifth sale were driven by strong demand in the rough diamond market”, said Reid Mackie, the Company’s Vice President Diamond Marketing. “This demand is supported by stable rough supply levels and continued positive retail news from the key diamond consumer markets. At our fifth tender, customer interest and bidding competition was particularly high for larger white gem lots. We saw prices for this product category again increase by low single digit percentages compared with the previous sale.” This interest in larger white gems was exemplified by the impressive sales result achieved for the 95 carat diamond acquired at the most recent joint venture production split' Said Mr. Mackie, “Customer competition for the 95 carat gem exceeded expectations, with the final result more than doubling the previous highest value achieved for a single diamond. To maintain confidentiality for the buyer, further specifics of this diamond’s sale will not be released.”

Plant throughput in the month of May was over 339,000 tons, the highest throughput reported for a month since the start of production. The recovered grade for May of 1.84 carats per ton reflects a short-term sequencing impact as ore processed for the month included a higher than typical proportion of 5034 Centre lobe material, which tends to be lower in grade but higher in average value per carat.

Jonathan Comerford, the Company’s Interim President and Chief Executive Officer, said, “The fifth sale of the year saw a strong performance for Mountain Province in sales and pricing, reflecting the growth in appreciation of our production by our customers as well as a continued strong rough diamond market.