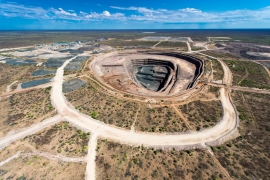 Lucara Diamond yesterday published the results of its Mineral Resource Update for its Karowe Mine in Botswana, which showed it would continue to yield a high grade of high quality diamonds for the remainder of its open pit life, and that underground mining was likely to continue until 2036. The remaining Indicated Mineral Resource for Karowe's AK06 kimberlite includes 7.9 million carats hosted in 57.85 million tons of ore at an average grade of 13.7 carats per hundred tons (cpht), with an average modelled diamond value of US$ 673 per carat.

The miner reclassified 200 meters of the AK06 kimberlite (between 600 and 400 metres) as Indicated Resource (higher level of confidence) instead of Inferred Resource, increasing the Indicated Mineral Resources (as at end 2017) by 44%, and increasing the remaining Indicated Mineral Resource for the South Lobe of the AK06 kimberlite - the source of high grade, high value diamond recoveries - by 54%. In short, the Mineral Resource Estimate for the AK06 pipe has been "significantly revised" from the previous estimate, based on the results of core drilling and microdiamond sampling work carried out in 2017/18.

Their update also led Lucara to alter their internal geological model for the South Lobe of AK06 kimberlite: they have recognitzed that the EM/PK(S) unit (part of the AK6) has the greatest volume within the South Lobe at depth. Historical recoveries from the EM/PK(S) have included several large and high value diamonds such as the 1109-carat Lesedi La Rona and the 813-carat Constellation. As a result of their revised model, this source of huge, high-quality diamonds should account for 51% of the remaining carats from the South Lobe, and and 35% of the tonnage, up from prior estimates of 12% carats and 8% tonnage. The company also expects this particular area will be responsible for 75% of the South Lobe Indicated recoverable carats between 600 and 400 masl. A controlled sample yielded a grade of 17cpht, 9.5% of which (or 47 diamonds in total) were 'specials' (+10.8ct), including 1 diamond greater than 100 carats and 6 larger than 50 carats.

Eira Thomas CEO, stated, "Going forward, the Karowe mine plan is dominated by South Lobe ore, with the high grade, high value EM/PK(S) unit becoming increasingly prevalent as we mine deeper.  We now understand that some of Karowe's large, high value diamonds originated from the EM/PK(S) unit including the historic 1,109 carat Lesedi La Rona and the 813 carat Constellation which sold for a record US$63 million. This resource update supports the continued recovery of large high value diamonds from the South Lobe throughout its remaining open pit mine life, and the likelihood for underground mining until at least 2036."