ALROSA To Slow Production at Major Mine, 2018 Output Unchanged 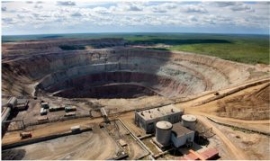 Russian diamond miner ALROSA has decided to suspend the construction of deep mine levels at its International underground mine due to health and safety concerns, which will impact the mine's output plan, though the miner's 2018 production plan remains unchanged.

The company states that the results of an audit conducted following the Mir mine accident back in 2017 led to revision of the construction project for the International mine. Mining at lower levels (below 800 meters) is expected to resume aat the end of 2018 when studies will be carried out and expert recommendations will be received. At the same time, the intensity of mine footage is expected to be reduced for safety reasons. According to preliminary estimates, the company states, mining operations below 800 meters will be fully restored in 2023, after which the underground mine will return to its designed capacity of 500,000 tons. ALROSA's production plan for 2018 remains unchanged at 36.6 million carats.

According to the company's estimates, from 2019 to 2022, the decline in production at International will be between 0.5 and 0.8 million carats per year. "This decision means changes in sequence of mining and preparing the ore body," said ALROSA First Deputy CEO - Executive Director Igor Sobolev. "Now we are starting planning for the next years, during which we will consider the existing options to intensify production at other fields and balance the production plan. We will also work to reduce the time required for the implementation of the necessary activities at the International mine." CEO Sergey Ivanov commented, "In our decision to reduce pace and output we were guided by new stricter rules governing health and safety system. Our employees' health and safety are an absolute priority for us."