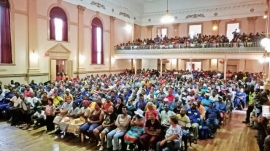 In a landmark deal - hailed as a first ever in South Africa - Kimberley’s illicit miners, known as 'zama-zamas', have now been legitimized. Deputy Minister of Mineral Resources Godfrey Oliphant issued the artisanal miners with mining permits in an agreement aimed at curbing the rapid growth of illegal mining which has been spurred on by rising unemployment. The newly-licensed informal miners have been given access to 500 hectares of land owned by Kimberley Ekapa Mining (KEM JV), a joint venture between Petra Diamonds and Ekapa Mining. “It’s been a long time coming, it’s something we have always envisaged,” said Petra Diamonds spokesman Gert Klopper, who added that industrial mining and small-scale miners “can co-exist”. He said the deal should be "mutually beneficial" and all parties hope it will put an end to the ongoing clashes between the KEM JV and illegal miners over mineral and property rights,

Heralding the partnership and transfer of mining permits as an, “historic achievement for the community,” Deputy Minister Oliphant says it proves that illicit mining can be combatted. “The most effective way of combating illegal mining is legalising it,” Oliphant said. “Once you formalise it, it solves many problems. Today we are happy to report that we have achieved what we planned for, where the artisanal miners are coming out of this process with about 500 hectares of diamondiferous land. We issued them with the licenses today, the two permits, and there are other bigger areas that they have applied for." With additional prospecting licenses in the offering, a spokesperson for the artisanal miners organisation, Northern Cape Artisanal and Small-Scale Miners, Lucky Seekoei, says despite being battle-scarred, the fight was worth it. “This is the implementation of the Freedom Charter, which proclaims that the minerals must be shared amongst the people of the country. We want to contribute to the Gross Domestic Product (GDP) of South Africa and the Northern Cape. We want to contribute to free education.” The artisanal miners will now be selling their gem finds through their trading company Batho-Pele Mining Cooperative on open tender.

Deputy Minister Oliphant handed the permits to the Batho Pele and Goedemoed Mining Primary Cooperatives as the beneficiaries of the land. KEM JV CEO, Jahn Hohne, said there was a place for artisanal miners in the diamond industry, as there were sites that were better suited for non-mechanised extraction. “Ekapa Minerals has always been willing to work towards a solution to the issue of people mining illegally on the company’s property,” Hohne said. “As a matter of fact, the partners in KEM JV were the first to submit a formal proposal in this regard in 2017." Hohne pointed out that while recent developments had seen many “illegal zama zamas” become “legal artisanal miners”, this should not be viewed as an automatic right for communities to demand and claim minerals from legitimate owners. “We must always remember that the formal mining industry remains a pivotal player in the economic success of South Africa and a major employer of South Africans.” The choice of Kimberley for the small-scale diamond mining pilot is highly symbolic as the hub of the country’s mining sector, and where gem giant De Beers was founded in 1888 by British colonialist Cecil Rhodes. It is also the home of the Kimberley Process, an international certification scheme to keep conflict diamonds off the market.