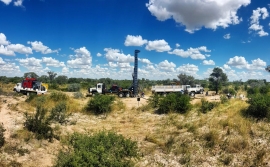 Junior miner Botswana Diamonds has been awarded the priority 2.5 hectare Mooikloof kimberlite pipe concession close to De Beers’ flagship Venetia Mine, the company today announced. Mooikloof is a known 2.5 hectare diamondiferous kimberlite pipe last prospected in 1986 and fits into Botswana Diamonds’ strategy of undertaking fresh exploration work with modern techniques in areas where they had been found and mined before. The adjacent Oaks mine was previously owned and successfully operated by De Beers, achieving a grade of 53 cpht at a value of $156. The large flagship Venetia mine is close by and in the same general geology. "Based on our experience elsewhere, we suspect that past explorers may have systematically under-estimated the kimberlite pipe size, grade and diamond quality of the Mooikloof kimberlite. We will deploy state-of-the-art exploration techniques to reassess the Mooikloof kimberlite, and maybe open another by-passed kimberlite pipe development," said company Chairman John Teeling.

The diamond exploration and project development junior also reports that their Technical and Economic Study on Thorny River is completed and they are now evaluating its options for the project. The deposit is between 1.2 and 2 million tons, the grade is between 46 and 74 carats per hundred ton of ore (cpht) and carat values between US$120 and US$220 per carat. The TEE Report indicated positive economics could potentially be achieved using the top end of the grade and value ranges, assuming additional kimberlite volume of similar grade and value can be defined with further exploration. "Analysis shows that a mine on the Thorny River deposit could be profitable assuming positive results from additional exploration," Teeling adds. "Now we must refine the volume, grade and value estimates while working on the mining model."

Botswana Diamonds also reports that while drilling at Ontevreden confirmed the existence of a kimberlite pipe, it showed the pipe to be smaller than the previously indicated geophysical anomaly, and they will shift their priorities accordingly. "Modern mineral exploration technology is not a magic bullet," says Teeling. "Modern geophysics indicated a 0.7 hectare pipe at Ontevreden.  Our drilling confirmed a smaller pipe, which is not currently commercial”.