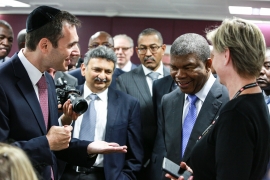 João Lourenço, the President of the world’s fifth largest diamond-producing country, Angola, today paid a ceremonious visit to the world’s largest diamond trade center, Antwerp - his first visit to an international diamond trade hub. In what was initially described as a friendly, exploratory house-call, President Lourenço made it clear that he views his visit to Antwerp as part of his intention to increase transparency and promote the country ́s image abroad in order to facilitate the exportation of goods and services and attract direct foreign investment.

Speaking in the Antwerp Rough Diamond Bourse to leading figures in the Antwerp diamond trade, President Lourenço said, “Due to our country’s policies, we have not been able to benefit properly from our diamond resources. We have a great responsibility. It is time to reverse the status quo.” As a result of those policies, currently just a fraction (approx. 1%) of Angola’s 9 million carats and $1.1 billion of annual diamond production is sold on the Antwerp diamond market, but the President’s visit appears to have confirmed hopes in the diamond capital that this may be about to change: “It has been said that Angola has been absent from Antwerp, but that is set to change. We are going to be represented in Antwerp, and will work together in partnership.” President Lourenço added that he had instructed the state-run diamond companies Endiama (diamond exploration, mining and licensing) and Sodiam (diamond purchasing, sales, trade management and marketing) to reverse their policies to the benefit of the country and private companies. "The responsible institutions have been instructed to see that Angola can return to this great diamond center," the Angolan President said.

This echoed the message the leaders of Antwerp’s diamond industry presented in explaining their added-value proposition, expressing their commitment to transparency and to maximizing the value of Angolan diamonds through Antwerp’s unique business model. In the words of Nishit Parikh, President of the Antwerp World Diamond Centre: “If you accept our offer to become partners in trade, you will not only earn higher prices for your diamonds, you will also show the world you are serious about fostering transparency, and intend to follow through on your message of change. Antwerp’s high level of expertise, wide range of services and the most extensive diamond tendering system in the world consistently create higher prices for rough diamonds than you will receive in any other trading centre,” Parikh added. “More specifically, Antwerp generates a 15% premium for diamond producers that export their goods directly to Antwerp.”

Following the country’s elections in August 2017, João Lourenço was sworn in as President, replacing Jose Eduardo dos Santos, who ruled the country with a unifying, if iron grip for 38 years. In 2016, the central committee of the ruling party Movement for the Liberation of Angola (MPLA), placed Lourenço at the top of its ticket for the August 2017 poll, thus making him the party's presidential candidate. However, it quickly became apparent that he had no intention of maintaining the status quo, initiating a process of reform that entailed the removal of the administrations of more than twenty public utilities and companies, including the central bank, oil, the diamond industry and the media. His battle against corruption in Angola is underway.

The fact that Lourenço initiated his visit to the Antwerp diamond industry, known for its transparency and compliance, is an indication he has further changes in mind for Angola’s diamond industry as well. “We are counting on you to help us transform our industry,” he said to Antwerp’s diamond trade. “We not only want to increase production, but also local processing and polishing, to create more employment. We have come here to learn from you.”

With annual production of more than 9 million carats worth over $1.1 billion, Angola is one of the five most important diamond producers in the world. And, following last week’s announcement of increased investments by Russian diamond mining giant ALROSA in the Luaxe diamond mine, its production is set to grow. The Luaxe mine is expected to start producing 10 million carats per year by 2020, doubling Angola’s current output, which currently entails the kimberlite mines of Catoca as well as high-value alluvial production at Cuango and Lulo (Lucapa Diamonds).

At this point, only about one percent of Angola’s rough diamond production is traded in Antwerp, in part due to Angolan legislation and in part due to the strict controls Antwerp places on the rough diamond trade. The fact that the new president visited Antwerp to see how its diamond trade operates seems to indicate he is serious about cleaning up the heretofore murky trade of Angola’s diamonds by partnering with Antwerp. This would not only be a huge boost for Antwerp, but also for Angola, as appropriate levels of tax revenues would finally flow back into the country.

As AWDC CEO Ari Epstein said to the Angolan President, “Knowing the resources that AWDC is capable of mobilizing to help you achieve your goal of achieving greater value from your beautiful natural resources, from your rough diamonds, I can tell you right now: you have come to the right place. The critical mass of diamond companies and services here in Antwerp is unparalleled, enabling diamond producers to achieve the best possible price for their goods. The Belgian government is a strong partner for the Antwerp diamond trade, which gives our industry a level of political and fiscal stability, predictability and transparency that sets us apart from our competitors. And I have every confidence that as you come to learn more about our exceptional value proposition, you will leave Antwerp having no doubt that this is the place that will help you in your effort to further modernize Angola’s diamond industry.”