Lerala Diamond Mine in Botswana Bought for $8.1 Million 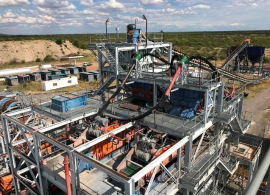 The Lerala Diamond Mine in central Botswana has been sold via an online auction for $8.1 million, a year after it was placed under provisional liquidation, according to a report from Reuters. The liquidator of the mine - which was held by Australian mining company Kimberley Diamonds and has been on judiciary management for the past year after it shut down due to a lack of funding and "weak market conditions" - put the entire operation up for sale in an online auction after its liquidators failed to secure viable offers.

It is a complete diamond mine, featuring an estimated five million tons of probable reserves at a grade of 31 carats per 100 tons, and includes the mining and water rights, five Kimberlite pipes ranging from 0.16 hectares to 2.35 hectares in area, an entire processing plant with its various crushers, 200tph conventional fines and course DMS plant, as well as it final integrated x-ray recovery house, hand recovery and grading unit.