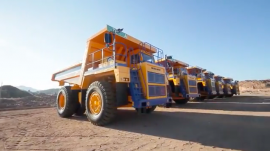 The government of Zimbabwe has starting working on a new Diamond Policy that will unbundle the state-run Zimbabwe Consolidated Mining Company (ZCDC) to ensure more players are able to exploit the diamond resources, said President Emmerson Mnangagwa.

The ZCDC was established in 2015 after the government consolidated all the diamond mining concessions in Chiadzwa, stripping the operating companies of their mining rights. It has been conducting extensive exploration and evaluation in search of Kimberlite pipes that can be mined economically, as alluvial mining is no longer economically viable. The miners that had been exploiting diamond licences in the country failed to make the necessary investments beyond surface mining.

Mnangawa said the new legislation would be drafted to ensure that communities with mineral resources benefit from the mining of them, imposing a legal requirement for companies to perform social responsibilities in areas where they operate. He said his administration had realized communities were not seeing much benefit from resources in their area. Speaking of the ZCDC, he said, "We have now realized that one company has no capacity to deal with the exploitation of this mineral, so we are in the process with the Minister of Mines (& Mining Development, Winston Chitando). He has a mandate to craft a new Diamond Policy ... with legislation so that people around areas with minerals must benefit." He added that people forced to relocate to make way for mineral exploitation must be adequately compensated.