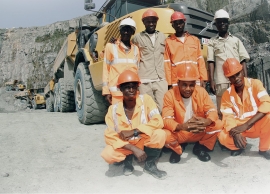 The highly controversial Israeli billionaire Beny Steinmetz, head of BSG Resources (BSGR), has apparently not allowed his various troubles to deter him from mining diamonds, as Bloomberg reports that the high-value Koidu mine in Sierra Leone, controlled by Steinmetz's family trust, has started mining again after halting production for almost a year. "It’s the latest step in a recovery for a business that’s spent much of the last few years in deep trouble," writes Thomas Biesheuvel. "While the mine produces some of most valuable stones in the world, it has faced a series of crises running from too much debt to the Ebola epidemic." In 2015, it became part of a fight between BSGR and the government. In an unrelated case, Steinmetz was arrested in late 2016 on suspicion of bribing officials in Guinea in a corruption case concerning the $20-billion Simandou mine in Guinea, which has one of the largest iron ore reserves in the world.** Nonetheless, in the past year, Biesheuvel writes, BSGR has worked to bring the mine back to life.

Steinmetz’s BSG Resources Ltd. is said to have spent about $50 million to extend the life of the mine by converting it from an open pit to underground operation. Biesheuvel writes that the site can now produce about 400,000 carats a year, and that could be increased to 650,000 carats. Diamonds from the mine sell for an average of about $300 a carat, with only Gem Diamonds Ltd.’s Letseng mine and Lucara Diamond Corp.’s Karowe selling for higher prices. Dag Cramer, an adviser to Steinmetz told Bloomberg, “This is the type of mining operation where you have to take the long-term view.” The diamond mine is BSGR’s only operating asset and has become something of a rebuke to wider claims that it’s only interested in flipping assets for a quick profit, Biesheuvel suggests, adding that BSGR still faces challenges with running the mine. To make it more profitable, the company needs to increase production by expanding the operation and also paying back its debts, which total more than $100 million. The Koidu mine previously supplied diamonds to Tiffany & Co. among others, and Standard Chartered Plc and Tiffany & Co. now own their debt.

**Guinean dictator Lansana Conté ordered Rio Tinto to relinquish half its rights to mine Simandou in 2008 on the grounds that it failed to meet its commitment to develop it. BSGR then bought those rights for just $160 million and two years later sold 51% of its share to Brazilian company Vale for $2.5 billion. In 2010, Alpha Condé, who won Guinea’s first democratic elections, launched a review of past mining deals. BSGR was stripped of its rights in 2014 after a Guinean government committee found evidence of alleged corruption in awarding the license. Guinea handed the rights back to Rio Tinto and a Chinese partner. But, as it turned out, Rio Tinto was not so clean either, as Alan Davies, its executive in charge of Simandou, was discovered to have paid $13 million to an informal adviser to Condé to help secure Rio Tinto’s rights to Simandou. In 2015, Steinmetz featured in the Panama Papers, and in 2017 he was detained by the Israeli police for questioning in connection with an investigation into money laundering, obstruction of justice and bribery in connection with the Simandou case. He is already under scrutiny by law enforcement authorities in four other countries, including the United States, where the US Justice Department has been investigating BSG Resources over potential violations of the Foreign Corrupt Practices Act since 2013. The mining company entered into administration in March of 2018, saying it had taken the decision to protect itself as it faces legal action amid an escalating legal dispute over allegations that it engaged in bribery linked with the mining project in west Africa.