Dominion Has Once Again Delayed Expansion of Ekati Mine in NWT 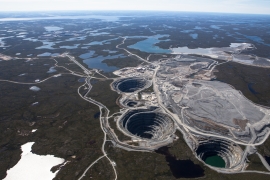 Dominion Diamond Mines announced last week that it would once again be delaying expansion of its Ekati mine in the Northwest Territories, which had been schduled to commence this year, extending the Ekati mine's life to 2033. They said the work planned for this year has been put on hold while the company studies how the project's profitability can be increased, according to CBC News. Dominion did not say how this delay would affect the overall timeline for the Jay pipe, which was expected to begin production in 2021.

In 2016, Dominion announced it would be forging ahead with development of the Jay Project at the Ekati Mine based on the positive results of a feasibility study and life-of-mine plan. The project, which includes building a dyke, draining part of a lake and digging an open pit, was targeted be funded from existing cash and internal cash flow, starting in 2017. Without the expansion, they estimated Ekati would run out of its existing reserves by 2020. Shortly thereafter, the company said expansion had been delayed as it needed time to receive the permits needed to begin construction, and that it was not planning to begin construction of the new Jay pipe at its Ekati mine until 2018. However, they also said existing reserves at Ekati are enough to prevent the cessation in mining that Jay was originally intended to prevent. Now this target date has now been put off once again. The water licences in the meantime were acquired. In July, US-based Washington Companies bought Dominion for approximately $1.2 billion.

The most recent information Dominion has published about the plans are as follows (from ddmines.com): The Jay project was approved for construction by the company in July 2016 and is the most significant undeveloped deposit at Ekati due to its large size and high grade. The timetable for the development of Jay includes road construction, which started in 2017; dike construction in 2019-2021; dewatering and start of pre-stripping in 2022; and mining and processing of Jay kimberlite by 2023. The current mine life of Ekati, including the Misery underground and the Jay project, is 2034. Several exploration and project evaluation activities are ongoing, including the Fox Deep project which would extend the life of Ekati to 2042.