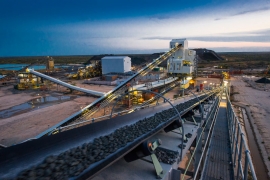 Lucara Diamond Corp recorded a loss of $7 million in the first quarter of 2018 amid a slight decline in revenues (-3%) and higher administrative costs. The Toronto-listed company operating in Botswana achieved revenues of $25.4 million compared to $26.1 million in the same period a year ago. They achieved $401 per carat, just under the $405 per carat from Q1 2017, at its first regular tender, yielding an operating margin1 of $170 per carat or 42% during the three months ended March 31, 2018. The miner also recovered 218 specials (+10.8 carats) during the quarter, representing the third best tally since mining began in 2012. The miner recovered in April a 327-carat white diamond, as well as a 472-carat light brown diamond.

Despite the limited loss, attributable to lower revenues, higher depletion and amortization costs, higher administrative and other expenses as compared to the same period in 2017, Lucara kept its dividend steady at 2.5 Canadian cents per share. “Costs per tonne processed during Q1 are higher than full year guidance due to mill maintenance completed during the period,” the company said in its results statement. “Forecast costs are expected to be within full year guidance,” it added. On a pre-tax basis, earnings came in at $1.4m compared to $4.9m in the first quarter of the 2017 financial year.

Lucara also noted that it is in the process of implementing a new sales approach, "to maximize client participation and achieve best possible revenue." The company has decided to conduct an Exceptional Stone Tender (EST) during the regular tender scheduled for June 2018, and will then transition to a blended tender process, whereby a greater number of exceptional stones will be sold as part of RST's. This will decrease the inventory time for large, high value diamonds and will generate a smoother, more predictable revenue profile, that better supports price guidance on a per sale basis. As part of this new approach, Lucara will retain the optionality of tendering truly unique and high value diamonds through special tenders, outside of the scheduled RST's.

Eira Thomas, CEO, commented: "Karowe delivered solid performance in the first quarter, underpinned by production from the South Lobe which yielded 218 specials, the third best quarterly tally ever, and included eight diamonds greater than 100 carats in size. The strong sales result achieved from our first Regular Stone Tender of the year is consistent with the improving sentiment of the broader diamond market, and positions Lucara well for its June sale, which will include both a Regular Stone Tender and an Exceptional Stone Tender." During the quarter, Lucara also completed the acquisition of Clara, a company whose primary asset is a secure, digital diamond sales platform that combines proprietary analytics with existing cloud and blockchain technologies to transform how rough diamonds are sold.