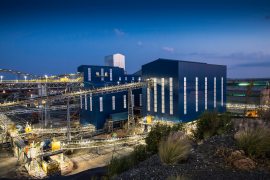 South African diamond producer Petra Diamonds reported a major revenue increase in its third quarter (Jan 1 - March 31 2018) driven by record production in the first three months of 2018. The miner said revenue for the quarter climbed 44% to $172 million from 1,373,771 carats sold, compared to $119 million from 1,069,886 carats sold a year earlier. The number of carats sold rose 28% compared to the same quarter a year earlier, while the average price per carat increased by 12% to $125 from $111, though the company clarifies that prices only increased approximately 5% on a like-for-like basis in comparison to the average for H1 FY 2018. Petra's Q3 production was also up by 20% to 1,194,947 carats (Q3 FY 2017: 999,768 carats), representing record quarterly production for the group.

Still, despite the 20% jump in production, Petra said illegal mining at its Kimberley Ekapa Mining JV (KEM) had a negative impact on their output during the quarter as a result of restricted access to high grade dumps at the surface retreatment operation. It also said its full year 2018 revenue continued to be impacted by the inability to sell approximately 71,000 carats of diamonds from the Williamson mine in Tanzania; the shipment was seized by the Tanzanian government in September last year, as part of the country’s ongoing probe into alleged wrongdoing in the diamond and tanzanite sectors.

CEO Johan Dippenaar said the company’s focus would move away from volume targets to optimizing value. ""Petra has recorded strong results in both production and sales, as well as a continued improvement in our safety performance. It is also important to note that the make-up of our production is transforming, with higher value ROM production representing ca. 82% of our carat volume. The future focus of the Company will move away from volume targets to value optimisation. While we are very encouraged by the operational delivery against our long-term expansion plans, risks to performance continue to relate to increased volatility in the ZAR/US$ exchange rate, grade and pricing variability at Cullinan, as well as the outlook for Williamson and the blocked diamond parcel." Shares in Petra Diamonds (LON:PDL) climbed almost 8% on Monday after they announced the results.