Gov't of Lesotho To Renew Gem Diamonds' Letšeng Lease Until 2034 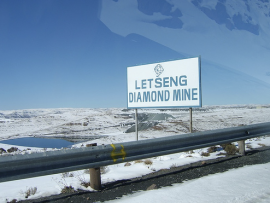 London-based miner Gem Diamonds has announced that the government of Lesotho, represented by the Prime Minister and Minister of Mining, has confirmed their intention to renew the mining lease of the high-value Letšeng mine until 2034. The mining lease may be further extended if necessary in relation to any underground development of the mine thereafter. The full terms of the renewed mining lease are subject to a statutory negotiation process with the Lesotho Mining Board and, when agreed, will be contained in a new mining lease agreement. A further announcement will be made once the statutory negotiations have been concluded and a new Letseng mining lease has been issued.

Gem Diamonds' CEO, Clifford Elphick commented: “The Lesotho Government’s announcement that they intend to renew the Letšeng mining lease until 2034 is welcomed as a demonstration of the positive partnership which exists between Gem Diamonds and the Government.  I would like to thank the Government of Lesotho for their ongoing support which will allow Gem Diamonds to continue to extract some of the world’s largest and most valuable diamonds from this remarkable resource.”