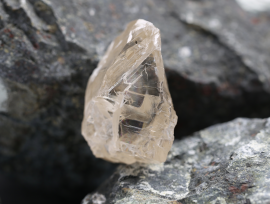 Lucara Diamond Corp. today announced the recovery of a 472 carat, top light brown gem diamond, the third largest diamond ever recovered from its 100% owned Karowe Diamond Mine located in Botswana. CEO, Eira Thomas comments, “In 2018, mining at Karowe is focused in the high value south lobe, which consistently delivers large, high quality diamonds in excess of 10.8 carats in size. The 472 carat is the third largest diamond ever recovered from the mine and will be sold alongside other exceptional stones recovered since the beginning of the year as part of the first exceptional stone tender (EST) later in 2018.”

For the year thus far, Lucara has recovered 218 'specials' (+10.8 carats) in Q1, the 3rd highest quarterly count on record. Large diamond recoveries in Q1 2018 include four stones greater than 100 carats each and at least eight EST qualifying diamonds. The company's first regular stone tender (RST) completed in March and will be reported as part of the Q1 results on May 8, 2018. Lucara continues to focus on maximizing value at Karowe, where a pre-feasibility study assessing the potential for going underground and extending mine-life from 2026 to 2036 is well underway and progressing on schedule for completion towards year-end.

In February 2018, Lucara also announced the acquisition of Clara, a secure, digital, rough diamond sales platform that combines proprietary analytics with existing cloud and blockchain technologies to modernize the current diamond supply chain. Commercialization work has since commenced, under a budget of approximately US$2 million, and is tracking on schedule for implementation using diamonds from Karowe, beginning in August 2018. Read our interview with CEO Eira Thomas about Clara here.