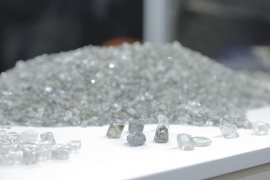 Canada's Stornoway Diamond Corp. realized a higher average price per carat from an improved size and quality mix in the first quarter of 2018, getting the year off to a strong start despite lower than expected carat production. According to the miner's First Quarter 2018 Production and Sales Results, Stornoway sold 399,135 carats at three tender sales in Antwerp for gross proceeds of US$45 million (C$56.4 million) at an average price of US$112 per carat (C$141 per carat). This compares favorably to the first quarter of 2017, when they sold 459,126 carats for approximately US$43 million (C$48.5 million), good for an average price of US$83 per carat, as well as Q4 2018, when they achieved an average price of US$86 per carat ( $108 per carat). The first quarter sales represented run-of-mine production recovered between October 2017 and January 2018. Included in the sales was a 37-carat Type IIa, D color, internally flawless stone that sold for US$1.3 million (US$36,000 per carat), the highest price achieved for an individual stone from the Renard Diamond Mine to date.

On the production side, Stornoway's first quarter diamond production was 285,851 carats produced from the processing of 562,520 tons of ore at an average grade of 51 cpht. This is down significantly from the same period a year ago, when they recovered 385,151 carats from 419,233 tons at an average grade of 92 cpht. Grade and carat recoveries during the quarter reflect the processing of lower grade production ore and ore stockpiles as the Renard mine transitions from open pit to underground mining. However, subsequent to the quarter end, Stornoway recovered a 189-carat stone that, while of relatively low quality, is notable for being one of the largest diamonds ever reported to have been recovered in Canada.

The company explains that during the quarter, mining in the Renard 2-Renard 3 open pit was hampered by poor weather conditions which restricted mining access and impacted equipment availability. In addition, approximately 55,000 tons of high grade Renard 2 ore which was scheduled for mining at the base of the pit could not be recovered due to unsafe working conditions adjacent to the west pit wall. This resulted in a higher proportion of low grade stockpile material being processed during the quarter than was planned, with a commensurate reduction in carat recoveries. In addition, the extreme weather conditions resulted in lower than expected plant availability, as ore froze in feed-bins. Processing rates in the quarter averaged 6,250 tons per day compared to an annual plan of 7,000 tons per day.

Matt Manson, President and CEO of Stornoway commented: “The first quarter saw a strong performance for Stornoway in sales and pricing, with successively higher prices at each of our three sales reflecting an improved size and quality mix and a strong start to the year for the diamond market. The quarter also saw the sale of our highest value stone to date, and ended with the recovery of the largest stone to date. He adds that the transition from open pit to underground mining, "and the commissioning of our new ore-waste sorting circuit, are progressing satisfactorily. Both are scheduled to be complete by the end of the second quarter, at which time the principal capital expenditure of this long-life project will be behind us.” By the end of the quarter, open pit mining at Renard 2 had been completed, and a progressively higher proportion of processed ore was being derived from the Renard 2 underground mine. Processing in March averaged 6,750 tonnes per day. Second quarter production is expected to be sourced predominantly from the underground mine.

The company's guidance for FY 2018 is stated as follows: Sales pricing achieved during the first quarter was within or above FY2018 guidance provided in January 2018, which on a segmented basis US$125 to US$165 per carat for +7 DTC sieve size production and US$15 to $19 per carat for -7 DTC sieve size production. Carat production during the first quarter was lower than planned. Higher than budgeted carat production in the remainder of the year will be required to achieve Stornoway’s full year FY2018 production guidance of 1.6 million carats produced and 1.6 million carats sold.