In Signing Option for AK10 Kimberlite Pipe, Did Pangolin Just Acquire The Next Karowe Mine? 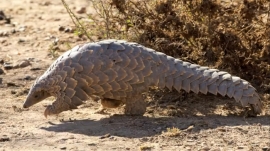 Pangolin Diamonds Corp. has signed an option agreement to earn up to a 75% interest in the diamondiferous AK10 diamond project located in Botswana, situated just 4 km from the now famous AK06/Karowe mine. “I am extremely pleased with this transaction", said Dr. Leon Daniels, President and CEO of Pangolin. "The AK10 kimberlite has been under-evaluated and the opportunity exists potentially to uncover and develop another AK06 Karowe mine.” Pangolin has bought a 51% stake in the AK10 diamond asset, and also signed an option agreement with Makanwu Civil Blasting (MCB), whereby MCB has granted Pangolin the sole and exclusive option to earn up to a 75% interest in respect of MCB’s precious stone AK10 Diamond Project located in the Central District of Botswana, Africa.

In 2002, Daniels co-founded African Diamonds for the sole purpose of acquiring kimberlites De Beers originally discovered and that he believed could be economical. He is one of the world’s-renowned kimberlite exploration geologists and identified the opportunity. The joint venture between African Diamonds and De Beers included the group of kimberlites in the area that De Beers had under-evaluated. This group included the AK6 kimberlite located in the Orapa Kimberlite Field. In 2010, Lucara Diamond Corporation purchased AK6 for approximately US$120 million. The Karowe mine on the AK6 kimberlite continues to be mined by Lucara Diamond Corporation and is one of the world’s leading producers of very high value diamonds and is known for containing rare large Type IIa diamonds with spectacular color and clarity.

AK10 is located in the prolific Orapa Kimberlite Field in Botswana - the second largest producer of diamonds by value as well as carats. In 2016, the Orapa Kimberlite Field produced 8.85 million carats and contains 83 known kimberlite bodies, of which eleven are currently mined, scheduled to be mined or have been mined. These include: AK01, AK02 and AK07 (Orapa, Debswana), AK06 (Karowe, Lucara Diamond Corporation), BK01, BK09, BK12 and BK15 (Damtshaa, Debswana), DK01 and DK02 (Letlhakane, Debswana) and BK11 (Firestone Diamonds PLC). The mineralization and results on the aforementioned kimberlites are not necessarily indicative of the results on the AK10 kimberlite.

The AK10 kimberlite pipe was originally discovered in 1968 from airborne magnetics by De Beers who established it is diamondiferous. The compositions of the garnets from AK10 are consistent with the kimberlite having sampled the diamond stability field. It has been modeled to be 6 hectares in size and is close to surface with only 9 metres of cover. It has excellent infrastructure close by with road access, and the main power grid is less than 1.5km away. Firestone Diamonds PLC’s BK11 diamond mine is 2.5km away from AK10 and Lucara Diamond Corporation’s AK6 kimberlite pipe (Karowe Mine) is 4km away from AK10.  Gareth Penny,  who was involved in the deal, announced his resignation as chairman of Pangolin at the end of last month. The former De Beers CEO will remain with the company as a special adviser to the board. A replacement has not yet been named. For details on the option and joint venture agreement, as well as the AK10 WORKPLAN, click through to the original article.