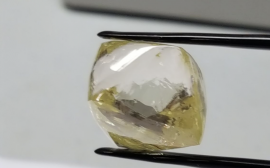 The Lucapa Diamond Company has announced it has secured major investment backing from a new cornerstone investor and existing shareholders to advance its diamond projects and continue delivering on its growth strategy. The US$12.7 million (A$16.5 million) placement, at no discount to market price, will enable Lucapa to immediately launch an extensive follow-up exploration program, including further drilling, at the Brooking diamond discovery in Western Australia’s West Kimberley region, the company states. Lucapa made what it calls a "spectacular" discovery at Little Spring Creek in Australia, in which 119 micro and macro diamonds were recovered from an 86.8kg sample, including white and yellow diamonds. Brooking is located within 50km of the Ellendale mine in the West Kimberley region which, until its recent closure, produced more than 50% of the world’s fancy yellow diamonds.

The US$12.7m placement was backed by firm commitments received from three major investors who collectively committed to invest US$10 million (A$13 million) at the prevailing market closing price of 23c. The placement was also strongly supported by a Perth-based investment fund. Lucapa explains that the funding package is overwhelmingly positive for the company and its shareholders, and the fact that the investors acquired the shares at market price demonstrates their confidence in Lucara, its projects and its growth strategy, and will enable Lucapa to launch an aggressive, fully-funded drilling and exploration program at the Brooking diamond discovery without diluting the company’s 80% interest in the project. The follow-up exploration program will include drilling at both the Little Spring Creek discovery, a second geophysical target about 350 metres to the north-east and other anomalies of interest.

Further, the company believes it strengthens their position in Angola, where the new president seeks to attract foreign direct investment: President Joao Lourenco, and the new Minister of Mineral Resources and Petroleum, Diamantino Azevedo, have set the diamond authority, Endiama E.P., a goal of doubling Angola’s diamond production to 14 million carats within four years. The investment also provides a working capital buffer for the Mothae diamond mine development and early bulk sampling program in Lesotho, which remains on budget and on schedule for commercial production in H2 2018. The cornerstone investor has significant global resource development experience and has been invited to join the Lucapa Board.