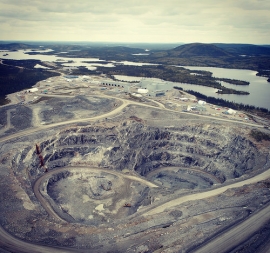 In the fourth quarter diamond sales of 486,633 carats were completed with gross proceeds of $52.6 million at an average price of $108 (US$86) per carat. For the full year, Stornoway sold 1,701,561 carats for gross proceeds of $186.2 million at an average price of $109 per carat (US$85 per carat). “In 2017, Stornoway’s Renard diamond mine produced a strong performance in mining, carat production, processing ramp-up, and cost. It has delivered strong operating margins, with EBITDA of $85 million, despite the lower diamond pricing environment that has characterized our first year of sales,” said President and CEO, Matt Manson. Renard established itself as the lowest cost diamond mine in Canada, and its diamonds have developed a strong position in the rough diamond market, he stated.

"The first half of 2018 will see ore production transition from our starter open pit to our underground mine. Ensuring an efficient ramp-up of the underground operations is a key priority for the Renard team. At the same time, we are introducing our new ore-waste sorting circuit designed to improve the quality of our diamond production and provide future processing expansion capacity.” Once completed, both projects will define the character of the project for the next decade. “Since the completion of our project fund-raising in 2014, and through four years of mine construction and operations, Stornoway has maintained a strong balance sheet and liquidity position. This will remain a priority for us in our financial management as we pass through the scheduled capital spending of 2018 and pursue the production and revenue growth potential of our business,” Manson concluded.

All quoted figures expressed in CAD$