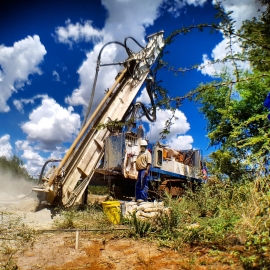 Botswana Diamonds has reported pre-tax losses of $251,000 (£178,000) for the six months ended 31 December 2017, compared with $192,000 (£136, 000) a year earlier. The losses were due to administrative costs as the company continues with its exploration for diamonds in Botswana and South Africa. Botswana Diamonds raised $705,000 (£500,000) earlier this year to fund the ongoing exploration activities. The junior miner reported a very active exploration period recently in South Africa and Botswana; with significant drilling and exploration on its advanced, flagship Thorny River project in South Africa.

Drilling is ongoing on the Ontevreden kimberlite in order to delineate size and diamond content, and nine kimberlites in the Northwest and Free State Provinces of South Africa were discovered or re-discovered. Exploration is continuing in the Central Kalahari Game Reserve (CKGR) in Botswana through Sunland Minerals, the Company's joint venture with ALROSA. Speaking about the many different projects Botswana Diamonds is currently involved with, Managing Director James Campbell explained that one needs to have a diverse portfolio in order to eventually end up with that, "elusive diamond mine", as only 60 of the 6,000 owned kimberlite pipes have ended up being diamond mines. The company will be releasing the results of its scoping, drilling and mineral chemistry activities.