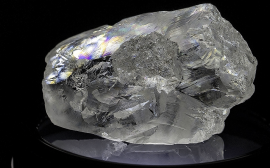 Australia's Lucapa Diamond Co., with assets in Angola, Lesotho, Australia and Botswana, has announced in its Annual Report for the year ended 31 December 2017 that diamond sales fell 38% to $31.6 million last year compared with $51 million a year earlier, though the 2016 figures are skewed by the $16 million sale of Angola's largest ever rough diamond, the 404-carat 4th February Stone. Excluding that exceptional sale, 2017 sales were only $3.4 million less than the year prior, but this does not change the fact that Lucapa recoverd 6% fewer carats (18,706) with 12% fewer specials (+10.8 carats) and at a 29% lower grade of recovery (7.4cphm). Even excluding the 404-carat stone, the average price per carat achieved fell 18% to approximately to $1,670 per carat from $2,045 per carat, which is still exceptional by any standard. The company also surpassed the previous high in terms of gravels processed by 33%.

The company is expanding its activities to now include four resources, yet Chairman Miles Kennedy opens his letter to company shareholders by saying, "2017 was a year of significant achievements for Lucapa, tempered with an almost equal level of frustration ... The frustration is that these achievements [detailed below] are still to be recognized or valued in the Company's share price", which he describes as a "mismatch". While diamond equities have had a poor year in general, Lucapa says its operating environment in central Africa "can test the patience of investors", though the main shareholders have stuck with them. Click the link to the original article te see the full report.

Lucapa uses the success of its high-value alluvial mining operations at the Lulo project in Angola to fund its parallel kimberlite exploration program to locate the hard-rock source of their exceptional alluvial diamonds. They currently have three drilling rigs available for that program. In addition to its Lulo project, in 2017 Lucapa secured a second high-quality resource with the acquisition of a 70% interest in the advanced Mothae kimberlite project in Lesotho, and are currently developing and constructing that project. Following the acquisition, they converted the existing indicated and inferred resource to a JORC 2012 compliant estimate, resulting in a JORC resource of 1.0 million carats at an average modeled price of $1,064 per carat. Lucapa says the current resource model stops at 300m, it was previously modelled down to 500m.

Lucapa's new mine plan for Mothae, with improvements deriving from a re-optimized pit design, increases gross project revenues 29% to $776m, increases diamond production 22% to 498k carats, and the life of mine extends to 13.5 years. Further, the company completed the a successful drilling program at the Brooking diamond project in Australia's West Kimberley, which Kennedy calls, "Australia's best diamond exploration discovery in decades." In January 2018,  the company recovered 119 diamonds from an 86.8kg core sample. Lucapa is also conducting exploration at the Orapa Area F Project in Botswana. The company reports cash and receivables of $9.6 million and an unsold diamond inventory of 2,711 carats.