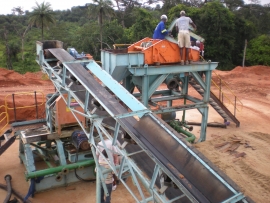 Stellar Diamonds and Australia's Newfield Resources (NWF) have reached agreement on the terms of a recommended all-share offer by Newfield to acquire the entire issued and to be issued share capital of Stellar, a deal worth an estimated $10.8 million. The Australian company will lend Stellar US$3 million to help it over its immediate short-term cash needs, while undertaking a right issue to raise A$30 million (US$23.6m) to re-finance the enlarged group. Stellar Diamonds' chief executive Karl Smithson recently spoke about the “extremely difficult” market for junior miners to raise new funds, as the miner seeks to bring the Tongo-Tonguma project into production. “Furthermore," he said, "the market capitalisation of Stellar during the last six months hovered around the US$2m level, which provided additional challenges of raising capital to develop the mine in Sierra Leone.”

The two boards believe that merger and funding will enable the Tongo-Tonguma diamond project to start commercial production, which is expected to create one of the largest diamond mines in West Africa, with an estimate resource of 4.5 million carats. NFWs' takeover proposal, which came in early February, was pitched at a premium price equalling 154% to the closing price of 4.925 pence per Stellar Share on the Latest Practicable Date, or 443% to the closing price of 2.3 pence per Stellar Share on January 31 2018, the trading day prior to announcement of the possible offer. Existing Stellar shareholders will own 8.14% of the group following the merger and financing.  NWF's own exploration in Sierra Leone has discovered kimberlites in its licence areas, while bulk sampling from some alluvial deposits has resulted in diamond sales at over US$450 per carat. In terms of its financial results, Stellar reported a US$984,928 loss for the year, and it ended 2017 with just over US$50,000 of cash and equivalents.