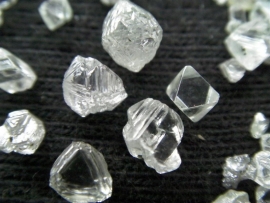 Stellar Diamonds PLC said Thursday it has finalised the tribute mining agreement and revenue share agreement with Octea Mining Ltd over the Tongo-Tonguma project in Sierra Leone. Stellar and Octea have agreed outstanding title opinions on the Tongo and Tonguma licences will be provided after payment of licence fees for the existing Tonguma licence, which Stellar will "shortly" fund. The licence has been approved by the Minerals Advisory Board of Sierra Leone, and the fee will be paid when Stellar gets funding, which it expects to receive as part of Newfield Resources Ltd's takeover of the company. The agreement's longstop date was extended several times from the original agreement in February. A summary of the Tongo-Tonguma project is available here.

Chief Executive Karl Smithson said: "The closure of the agreements with Octea mark a major milestone for Stellar as it secures the Tongo-Tonguma project for the planned long-term development programme. We have already commenced the front end engineering design programme and have signed a contract for 9,000 metres of mine development drilling that will enhance the geological control for the first two levels of mining." He added: "Discussions are ongoing with Newfield Resources regarding the indicative offer which, if successfully concluded, and supported by our respective shareholders, will result in sufficient funding being made available to bring the Tongo-Tonguma project into production according to the refined mine plan." Stellar said Wednesday the deadline for Newfield to make a firm intention to either make or not make an offer for Stellar has been extended until March 16. Stellar's shares more than doubled in value at the start of February after the mineral explorer announced it had received a takeover offer from Australian-listed Newfield.