Lucara's Revenues Fall in 2017 while Average Price Per Carat Rises 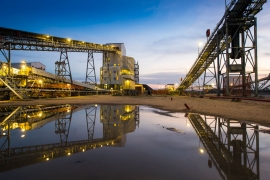 William Lamb, President and Chief Executive Officer explained, "The Company continued to receive strong prices for the sale of our diamonds this year demonstrating the quality of the south lobe diamonds at Karowe. Our capital projects for enhanced diamond recovery were completed on time and within budget and will ensure maximum value is recovered at the mine. These systems are operating well and above expectation. We are advancing our resource expansion work with the underground study at Karowe, with a pre-feasibility study to be completed during the second half of 2018." Concerning their expansion work, the company's drilling program at the Karowe Mine to test the AK06 kimberlite at depths below 400m metres was completed during the year. An updated resource update is expected to be complete in Q2, 2018 and the pre-feasibility level study for the Karowe AK06 underground development is underway. Looking forward, Karowe is forecast to process 2.5-2.8 million tons of ore, producing between 270,000 and 290,000 carats of diamonds in 2018. Revenue is forecast between $170 million and $200 million.