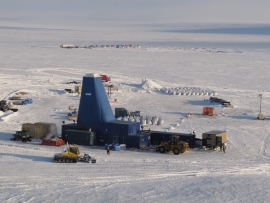 Peregrine Diamonds, a Vancouver-based junior miner with exploration projects in Canada and Botswana, announced its Resource Development Program has resulted in a 58% increase in the Inferred Mineral Resource at the high-grade CH-6 kimberlite pipe at its 100%-owned Chidliak Diamond Project, Nunavut, Canada. Their inferred resource at CH-6 jumped from 11.39 million to 17.96 million carats after testing. This brings the company's total Phase One Diamond Development resource at the CH-6 and Ch-7 pipes to 22 million carats. Drilling in 2017 delineated the high-grade CH-6 kimberlite pipe to a depth of 540 metres below surface (“mbs”) and the kimberlite remains open below that depth, the company said. Results from CH-6 include an updated Inferred Mineral Resource of 17.96 million carats in 7.46 million tons to 525 mbs, an increase of 61% from 4.64 million tons previously announced.

“Since we announced our maiden inferred resource at CH-6 in May 2014, we have grown this resource by an incredible 140%, from an initial 7.5 million carats to the 18 million carats we are proud to announce today", said Tom Peregoodoff, Peregrine’s President and CEO. "The growth of the CH-6 resource is remarkable, and together with the CH-7 kimberlite resource, brings the Phase One Diamond Development resource at Chidliak to an impressive 22 million carats. Simply put, there is no other Canadian development-stage diamond project that compares with Peregrine’s flagship project in terms of resource value or upside potential. This Phase One resource is based on only two of the 74 currently known kimberlites at Chidliak providing significant resource expansion possibilities which the Company intends to pursue in 2018.” Mr. Peregoodoff added, “The PEA we announced in 2016 clearly established Chidliak as a unique diamond development opportunity. Today’s announcement of the significant expansion of the diamond resource should have a material, positive impact on the forthcoming economic analysis."