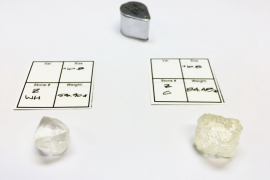 Mountain Province Diamonds, with a 49% share in a joint venture with De Beers Canada to operate the Gahcho Kué diamond mine in Canada’s NWT, has recorded its most successful rough sale to date as higher prices, together with robust customer demand in Antwerp, led to record results. The company rode a 47% increase in average value per carat compared to December, US$78 per carat from US$53 per carat, to achieve a 43% increase in total value: US$27.3 million, obtained from 351,000 carats. The miner attributes its stronger realized values the improved size distribution as well as the quality of the fancies and specials. In addition, the company says, "robust demand saw prices increase an average of approximately 7% over those of the preceding sale held in December," noting that only half of the fancies and specials from the last production split of 2017 were offered in this sale, with the remainder deferred for inclusion in the upcoming second sale of 2018. The "split" refers to the fact that the two companies split the run-of-mine diamonds according to their stake in the venture, and bid against each other for the fancies and specials.

“Our January sale broke all records in terms of revenue and customer activity," said Reid Mackie, the company’s Vice President Diamond Marketing. "More than 200 companies participated, with 140 placing bids and delivering our highest revenue figure to date. Particularly promising is that all product areas saw healthy price increases, especially the large, special stone category which achieved both record prices per carat and the highest value individual stone sold by Mountain Province to date”, though they omitted to say what price that stone achieved. “The results of this sale were driven not only by the quality of the diamonds on offer but stronger rough diamond prices generally, as we experienced an improvement in customer sentiment similar to that which has been reported by the industry generally", said David Whittle, the Company’s Interim President and CEO, echoing the sentiment we have been hearing from miners lately. "We have experienced general rough diamond price increases of approximately 12% since October, supporting a view of improving market fundamentals. Operationally, we note the strong plant throughput in January, representing exceptional performance in the heart of winter”, he adds.