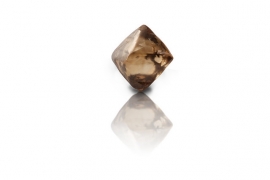 Rio Tinto rode the wave of higher commodity prices and saw results from its cost cutting drive to record a 90% increase in net profit to $8.8 billion in 2017, and their diamond operations got in on the party, with profits climbing 96% to $92 million. Revenue jumped 15% to $706 million from $613 million, as demand for rough diamonds heated up following the normalization of the Indian market post-demonitization - the currency shift the government initiated in November 2016. Earnings before interest, tax, depreciation and amortization (EBITDA) grew 20% to $287 million.

“Rough diamond demand was solid in 2017,” the company noted in its publication of 2017 results. “Factories in India increased manufacturing capacity as the market normalized following Indian banknote reform in 2016, and the outlook in key emerging markets improved. This resulted in sustained restocking activity throughout the pipeline for most of the year.” They note that diamond production increased by 20 percent relative to 2016, with higher carat production at its Argyle mine in Australia due to the additional processing of higher grade alluvial tailings, and an increase in carats recovered at the Diavik mine in Canada due to higher recovered grades. Rio has a 60% share in the Diavik mine, with Dominion Diamond Mines owning the other 40%. They further note that development of the A21 pipe at Diavik remains on schedule and within budget, and offered a diamond production guidance for 2018 of between 17 and 20 million carats.

Rio Tinto has also been expanding its fleet of autonomous trucks. They say their driverless trucks have proven to be more efficient than their manned counterparts, with autonomous vehicles operating 700 hours longer last year and with 15% lower unit costs. Rio says more than 80 autonomous Komatsu trucks are currently operating and the miner plans increasing the number to more than 140 by the end of 2019. Rio has also announced plans to have a network of driverless trains in Western Australia. In October, it completed its first long-haul journey with a completely autonomous locomotive.