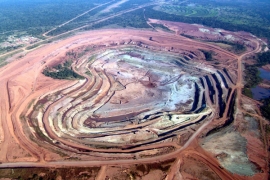 Angola produced 9.44 million carats of diamonds last year, a 5 percent increase from the 9.02 million carats produced in 2016, based on data presented by the country’s Ministry of Mineral Resources, reports Rough & Polished from the Mining Indaba in South Africa. Rough diamond sales earned $1.102 billion in revenue, a 2 percent increase from 2016, as the average price per carat dropped 2.4 percent to $116.76 per carat compared with $119.65 per carat in 2016.

According to Endiama, analysts forecast that annual diamonds production in Angola may be over 10 million carats in the coming years as more diamond mines will be commercially explored. Angola has over 600 known kimberlite pipes, of which only a few have been confirmed as being diamondiferous and commercially viable. Angola’s diamond mining interests were managed by Endiama, which holds the exclusive rights for exploring, mining, trading and polishing of the country’s stones. The company has interests in Catoca, which produces more than 80 percent of the country’s annual diamond output, and also had a stake in Lucapa's Lulo Diamond Project. Endiama is also engaged in prospecting activities at the Luaxe kimberlite together with ALROSA, where the companeis are developing the kimberlite with reserves evaluated at 350 million carats.