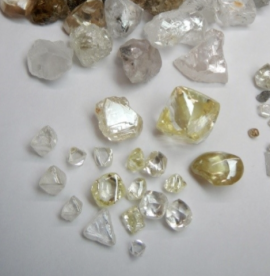 Australia's Lucapa Diamond Company has announced their Q4 and final 2017 results, with fewer large diamond recoveries and lower prices achieved leading to a 38% decline in annual sales. The company earned $31.6 million in revenue from diamond recovered at their Lulo Diamond Project in Angola, compared to $51 million a year ago. Last year's figures include the 404 carat "4th February Stone", which sold for US$16m in February 2016. Even without the earnings from that big diamond, however, sales would still have been 10% lower than the $35 million earned in 2016 excluding the big stone. This is a result not due to the 6% decline in production to 18,706 carats - as the volume of carats sold actually increased - but rather the number of specials (+10.8 carats) recovered, which fell 12% to 238 from 269 a year earlier. The price earned per carat also fell by 44% to $1,669 - which they say is still the world’s highest US$ per carat from alluvial production - but again this was in part a result of the 404-carat diamond pushing 2016's prices higher.

During the fourth Quarter, Lucapa sold one parcel of Lulo alluvial diamonds weighing 4,126 carats for gross proceeds of US$7.3 million (A$9.6 million), representing an average price per carat of US$1,770. While a second Q4 sale was considered in December 2017, they opted to schedule that sale in early 2018 to maximise sale values in what is traditionally a stronger demand period. That strategy appears to have paid off, as Lucapa today (Feb. 2) announced that the sale of 4,170 carats of Lulo diamonds achieved gross proceeds of US$9.14 million (A$11.43 million), representing an exceptional average price per carat of US$2,192. The latest sale takes total sales of Lulo diamonds, from exploration and mining, to US$106.81 million at US$2,118 per carat. Upcoming 2018 sales will include the exceptional 129 carat and 78 carat D-colour Type IIa gems recovered during the Q4, along with the 43 carat yellow – the largest coloured gem recovered to date from Lulo.

Diamond production for the Q4 totalled 5,127 carats, contributing to an annual total of 18,706 carats. These production figures were down (by 3% and 6% respectively) on the corresponding 2016 totals, primarily as a result of a higher proportion of gravels being sourced in 2016 from Mining Blocks 6 and 8. This mix also contributed to lower grades of 8.1 carats per 100 cubic metres (cphm3) for the Quarter and 7.4 cphm3 for the year. They add that despite the wet conditions, the Lulo partners continued to advance their systematic kimberlite drilling program during the Quarter. In addition to its Lulo exploration activities, Lucapa also intends to start commercial production at its Mothae mine in Lesotho in the second half of 2018, and is carrying out exploration at the Brooking lamproite project in Western Australia, where the results have ranged from promising to "astounding".