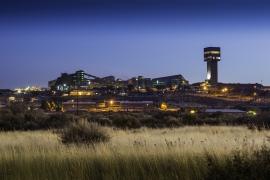 Petra Diamonds announced in a trading update (unaudited) for the six months ended 31 December 2017 (H1 2018) its production was up 10% to 2,208,056 carats (H1 FY 2017: 2,015,087 carats), in line with H1 guidance of 2.2 - 2.3 Mcts. This represents record production for any six month period for the company. Revenue, however, was down 1% to US$225.2 million (H1 FY 2017: US$228.5 million), mainly due to the Government of Tanzania confiscating a parcel of stones from the Williamson mine (ca. 71,000 carats), claiming Petra had undervalued the goods. This prevented those diamonds from being sold during the period and the parcel remains blocked for export, though the company says it, “will continue to engage with the [Tanzanian government] in order to find a resolution to release the blocked parcel.” Petra does not expect this situation to have an impact on FY 2018 guidance, as they expect to sell the Williamson parcel in H2. Correlatively, the amount of diamonds sold during the period was down 5% to 1,811,154 carats (H1 FY 2017: 1,910,113 carats). They note that H2 is expected to be a stronger sales period, due to the higher number of tenders held (four in H2 versus three in H1).

Petra has reduced its FY 2018 production guidance to 4.6 - 4.7 Mcts (4.8 - 5.0 Mcts previously), mostly due to the lowered grade guidance at Cullinan, as well as production lost further to the labour action in South Africa in Q1.The lower grade at Cullinan in largely offset by a higher average diamond price, resulting in their revenue per ton remaining materially in line with expectations. Recoveries at Cullinan's new plant to date indicate that a steady state higher grade can be achieved by recovering larger quantities of small, low value diamonds; however, it is Petra's initial assessment that it would be uneconomic to do so and would not be in line with the Company's strategic focus on value rather than volume production.

Rough diamond prices on a like-for-like basis were down approximately 3.5% compared to H2 FY 2017, dropping 5% from July to October 2017, before recovering by around 1.5% by end December 2017. However, higher average values were realised at Finsch, Cullinan and Koffiefontein further to the improved product mix associated with higher production levels of undiluted ore and lower contribution of tailings carats. Petra also notes that its underground expansion projects at Finsch and Cullinan continue to deliver increased volumes of undiluted ore from newly established mining areas. The new Cullinan Plant throughput ramp-up is said to be progressing well, with 1 Mt ROM treated during Q2, achieving planned ROM capacity. Five stones larger than 100 carats (though of poor quality) were recovered through the new plant in H1 (including a 574.15 carat stone, being the largest stone recovered by Petra at Cullinan to date), and a number of other higher value stones, in line with the expected increase in special stones as indicated by historical records as mining from the Western side of the orebody increases. Plant process optimisation is ongoing.

"Petra has delivered a record production performance, with 2.2 Mcts being the highest level achieved for any half year period for the Group, and delivered against a solid safety performance, demonstrating the high level of focus on this most important area", said Johan Dippenaar, Chief Executive Officer. "Petra's stated strategy is to focus on value as opposed to volume production, which is particularly pertinent to diamond operations, as not all carats are of equal value. Our assessment of optimal recoveries at Cullinan has therefore led us to opt for lower carat volumes, due to the positive impact that not recovering the small diamonds has on the average value per carat. This has led to lowered production guidance for FY 2018, but does not materially impact our expected revenue, further to the positive uplift in Cullinan's average value per carat. Likewise, we have been very encouraged by the recovery of large diamonds and other higher value single stones through the new Cullinan Plant to date, which was in line with our expectations that the incidence of such stones would increase as they are historically associated with the Western side of the orebody."