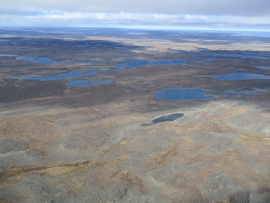 While out on North Arrow Minerals' Mel diamond property on Nunavut's remote Melville Peninsula, prospectors made a welcome discovery: a 62 kilogram surface sample of diamond bearing kimberlite. The sample returned 23 micro-diamonds. This prompted North Arrow to significantly increase the size of its 100% owned Mel Diamond Project from 7,500 ha to 56,075 ha. Claim staking was initiated as a result of North Arrow’s September 2017 discovery of a new diamond bearing kimberlite field at Mel, located within 20 km of tide water on the Melville Peninsula, Nunavut.

President and CEO Ken Armstrong siad, “The expanded Mel Project connects the Mel North area with the Mel South KIM anomaly, approximately 15 km southwest of the ML-8 kimberlite discovery. Mel is highly prospective for additional kimberlite and diamond discoveries in 2018 with exploration work, including drilling, scheduled to commence in May.” He told CBC News, "it's a very good start. Typically when you find one kimberlite then there's a very good shot that there could be more. The next stage will be drilling to try and see how big that particular kimberlite [is] and then plan to try and find more." The company plans to be back at Mel this summer to set up a six week exploration camp to drill the kimberlite, as well as a few other zones over a 15 square kilometre area of the property.

"Since becoming a diamond focused explorer in 2013, North Arrow is the only junior exploration company to discover a kimberlite field in Canada, having now discovered two of the five kimberlite fields found during that period" Armstrong commented. "In addition to drilling at Mel, North Arrow is well positioned for further discovery in 2018 with spring drill programs planned at the Loki and LDG Projects in the NWT as well as pending diamond results from a 210 tonne mini-bulk sample collected from the Q1-4 kimberlite at the Naujaat Project.”