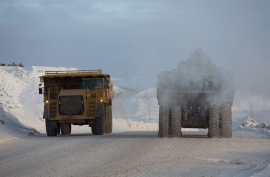 Concerning the increase in production, Igor Sobolev, First Vice President of ALROSA said, "Despite the shutdown of the Mir underground mine in view of the accident in August 2017, the Company delivered on the annual diamond production plan. The key drivers for diamond production growth were higher output at the Udachny underground mine, development of the richest part of the deposit at the Jubilee pipe, increased grade at the Arkhangelskaya and Karpinskogo-1 pipes operated by Severalmaz, as well as higher production at the Botuobinskaya pipe."

The Russian miner reports that rough diamond sales in Q4 2017 amounted to 9.4 million carats earning $881 million. Fourth quarter sales of 6.2 million carats of gem-quality diamonds were down by 6% compared to Q4 2016 (6.6m ct.), though the average price increased to $139 per carat compared to $127 per carat a year ago. As a result, total sales of gem-quality rough diamonds in Q4 increased nearly 4% to $881 million from $849 million. ALROSA also sold 3.2 million carats of industrial diamonds at an average price of $6.5 per carat for a total of $20.8 million, approximately the same amount ($21m) earned from the sale of 3.5 million carats at $6 per carat in 2016. Polished diamond sales for Q4 2017amounted to $28.7 million.