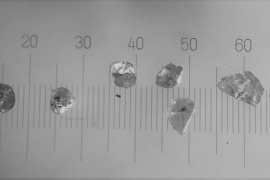 A global miner hoping to revive the Kimberley diamond industry has made a significant discovery, only 50km east of the old Ellendale mine that once produced half the world's rare fancy yellow diamonds, writes ABC Australia. Only a few weeks after Lucapa Diamond Company began drilling for lamproite on its Brooking project, it has uncovered 119 diamonds, including seven macro diamonds. The diamonds were recovered from an 86.8kg core sample in a 7.5cm drill hole at Little Spring Creek in the West Kimberley. Chairman Miles Kennedy said after almost three decades in the diamond industry, the discovery was "nothing short of astounding". He added, "This is without a shadow of a doubt the most spectacular single drill hole I've ever seen."

"We've drilled thousands of holes and you actually don't expect to see any diamonds at all", said Kennedy. "It's such a small sample and diamonds in these pipes are so widely dispersed, so finding both macro and micro diamonds out of this very small sample is just wonderful. It's very significant." Mr Kennedy has a long history of searching for diamonds in the Kimberley, having set up the Ellendale diamond mine almost 25 years ago, the newspaper writes. "It's too early to say whether we will find yellows or pinks," he said. "What we've recovered so far are whites, but they certainly seem to be very good quality small diamonds that we've found so far, so we'll go on," he said. "This is the first new discovery 50km east of Ellendale, and historically hundreds of millions of dollars has been spent looking for diamonds in this area. It's going to be a new era, at a time when the Argyle diamond mine is winding down towards closing, at a time when Ellendale mine has closed. Without us developing a mine here, Australia will be without a diamond mine, but we certainly aim to change that." Mr Kennedy said follow-up drilling and bulk sampling programs would begin as soon as access was available towards the end of wet season.

ABC News also notes that the Brooking discovery comes only weeks after fellow Perth-based miner POZ Minerals announced a valuation on diamonds extracted in 2005 from a former diamond field on its Blina trial mine site on the western side of Ellendale had doubled in value. The new independent valuation of the exact same diamond parcel data on Terrace 5 estimated its Fancy Yellow component had increased in the past decade by 131% to $US3,391 per carat ($A4,403 per carat). The largest diamond in the valuation parcel weighed 8.43 carats, with an estimated 2017 value of almost $US45,000. The revaluation was undertaken by Independent Diamond Valuers International, which had previously been responsible for sorting, grading, valuing and selling diamonds from the Ellendale Diamond Mine.

Executive chairman Jim Richards said the revaluation marked a significant development for the project, which was on track for bulk sampling and trial mining operations to begin mid-year. "At a current Blina diamond price of $US389 per carat, Terrace 5 equates to a significant economic target," he said. "Given the successful historic recovery of significant quantities of very high quality diamonds from the channels, our new GPR geophysics technique may well prove to be a game changer by quickly and inexpensively defining the highest quality diamond targets." Blina's diamond appeal has over the past 30 years attracted a total $30 million exploration spend by previous explorers.