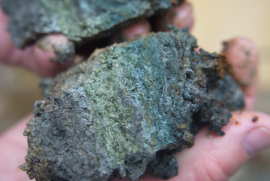 The Finnish Mining Authority has granted Irish diamond exploration company, Karelian Diamond Resources, an Exploration Claim in the Kaavi region of Finland. The four-year Claim, which is close to Karelian's Lahtojoki mining concession, covers an area of 28.84 Hectares surrounding the location where kimberlite boulders in till have been discovered. The finding of kimberlite is significant as these igneous rocks can sometimes contain diamonds. An exploration permit provides the holder with an exclusive right to apply for a mining permit. The licence can be appealed within the next 30 days, after that Karelian has the exclusive right to apply for a mining permit.

“I am delighted that Karelian Diamonds has been granted an exploration claim in the area where the recently discovered kimberlite boulders suggest the presence of an undiscovered Kimberlite source”, said Richard Conroy, Chairman, Karelian Diamond Resources. Yesterday, the company also announced positive results on a series of till samples taken to trace the origin of the green diamond previously discovered in the Kuhmo region of Finland. The results suggest that the search is coming into very close proximity to the source of the diamond.

Last October, Karelian was granted an exploration permit in the Kuhmo region of Finland, where it discovered a green diamond at the start of the year. That permit is also for a period of four years. In 2016, the company acquired of the Lahtojoki Diamond Deposit, along with the acquisition of a mining permit for this deposit. The company believes it has potential to become profitable open pit diamond mine.