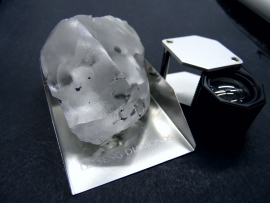 Gem Diamonds this morning announced the recovery of an exceptional quality 910-carat, D color Type IIa diamond from the Letšeng mine in Lesotho, making it the fifth largest gem-quality diamond ever recovered in history and the third largest in a century, behind only Lucara Diamonds' 2015 discovery of the 1,009-carat Lesedi La Rona. **(correction to original story: the 969-carat Star of Sierra Leone was discovered at the Diminco Mine in 1973 - ed.)  “Since Gem Diamonds acquired Letšeng in 2006, the mine has produced some of the world’s most remarkable diamonds, including the 603 carat Lesotho Promise, however, this exceptional top quality diamond is the largest to be mined to date and highlights the unsurpassed quality of the Letšeng mine", Chief Executive Officer Clifford Elphick said in a statement. "This is a landmark recovery for all of Gem Diamonds’ stakeholders, including our employees, shareholders and the Government of Lesotho, our partner in the Letšeng mine.”

The announcement comes just a weekend after the announcement of 8.53-carat flawless pink diamond with good shape from Letšeng, and just a week after the recovery of two high-quality 117 and 110-carat, D color Type IIa diamonds from the Letšeng. Type IIa stones often achieve the highest dollar per carat rough prices in the world and the London-based company has now recovered three in January after unearthing seven such stones in 2017 and only five in 2016. Gem did not say how it will sell the diamond or what it could be worth. Its value will be determined by the size and quality of the polished stones that can be cut from it. Lucara Diamond Corp. sold its Lesedi La Rona diamond for $53 million last year, but got a record $63 million for the 813-carat Constellation they found at the same time in 2015. The new recovery will be another boost for Gem Diamonds, that dropped to a record low last year after prices for its stones fell and it was forced to close the Ghaghoo mine in Botswana.

The largest diamond ever discovered is the 3,106 carat Cullinan, found near Pretoria, in South Africa, in 1905. It was cut to form the Great Star of Africa and the Lesser Star of Africa, which are set in the Crown Jewels of Britain. Lucara’s 1,109 carat Lesedi La Rona from the Karowe Mine in Botswana is the second-biggest, followed by the 995-carat Excelsior recovered in 1893 at the Jagersfontein Mine in South Africa. Gem Diamonds Limited owns 70% of the Letšeng Diamond Mine, with the Government of the Kingdom of Lesotho owning the remaining 30%. It is the highest achieving average US$ per carat kimberlite mine in the world. Since Gem Diamonds acquired the mine in 2006, Letšeng has produced over 60 +100 carat, predominantly high value, white diamonds. Amongst these diamonds recovered are the iconic 603-carat Lesotho Promise, the 550-carat Letšeng Star and the 493-carat Letšeng Legacy.