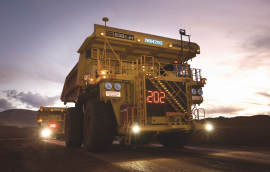 Diversified mining conglomerate Rio Tinto will expand its fleet of autonomous haul trucks at its world-class iron ore operations in the Pilbara by more than 50 percent by 2019 after signing agreements with leading manufacturers Caterpillar Inc. and Komatsu Ltd. to convert traditional trucks to autonomous vehicles, the company announced today. A total of 29 Komatsu haul trucks will be retrofitted with Autonomous Haulage System (AHS) technology starting next year. The project at the Brockman 4 operation is scheduled for completion by mid-2019, allowing the mine to run entirely in AHS mode once fully deployed. A further 19 Caterpillar haul trucks at the Marandoo mine will also be retrofitted starting mid-2018 for completion by the end of 2019. The future of large-scale mining has arrived.

The retrofit is significant for Rio Tinto as it marks the first time AHS technology has been deployed by the company on Caterpillar haul trucks. Once completed, the retrofit projects are expected to make a significant contribution toward Rio Tinto’s $5 billion productivity program. Rio Tinto Iron Ore chief executive Chris Salisbury said, “Rapid advances in technology are continuing to revolutionise the way large-scale mining is undertaken across the globe. The expansion of our autonomous fleet via retrofitting helps to improve safety, unlocks significant productivity gains, and continues to cement Rio Tinto as an industry leader in automation and innovation."

Last year, on average, each of Rio Tinto’s autonomous haul trucks operated an additional 1000 hours and at 15 percent lower load and haul unit cost than conventional haul trucks. About 20 per cent of the existing fleet of almost 400 haul trucks in the Pilbara is AHS-enabled. Following the completion of the projects with Komatsu and Caterpillar, Rio Tinto will have more than 130 autonomous trucks, representing about 30 per cent of the fleet. From a safety perspective, automation has been shown to reduce the number of people exposed to potential hazards as well as reduce the number of critical risk scenarios.